Ovi-lution. Among women who have infertility problems, 30 to 40 percent have ovulation problems. An egg needs to be released from the ovary each month in the middle of the cycle so it can be fertilized and implant into the uterus to develop into a pregnancy. Ovulation can be caused by several different drugs. Your doctor will discuss your treatment regime. 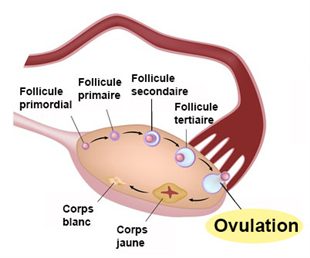 If a woman is not ovulating, ovulation induction may be necessary. Fertility issues that arise most frequently include: fatigue, weight fluctuations, Polycystic Ovarian Syndrome (PCOS). Other factors may include pituitary disorders, thyroid disorders, and elevated prolactin levels. Often failure of ovulation is due to ovarian failure. Post-menopause can occur following treatment for cancer or start of menopause – premature ovarian failure.

If a woman has an irregular menstrual cycle, ultrasounds (follicle tracking) and hormone assays may help identify the fertile period of the month. The cause of ovulation problems needs to be identified with such tests. There are a number of tests including an ultrasound scan of the ovaries and womb, blood tests to assess a range of hormones, and androgens (male hormones).

It is also necessary to make sure the ovary will respond to the treatment. There is a high risk of ovulation failure due to the menopause. If the FSH (> 10) and AMH concentrations are low when measured at the start of a cycle, ovarian failure is probable. The fertility treatment is less successful. Ovulation can only occur if medical intervention is triggered by the start of menstruation. If tablets do not function, you will need stronger fertility injections to help your ovaries produce eggs.

Ovulation Is Induced Using One Of Two Main Drug Regimens:

Clomiphene (or clomid) tablets, or tamoxifen, increase the pituitary development of follicle stimulating hormone (FSH), thereby stimulating follicles and hence egg growth. This tablet is given at a starting dose of 50 mgs from the 2nd to the 6th day of the cycle. If the cycles are really infrequent, it might be appropriate to offer a different kind of pill called Norethisterone. Gonadotrophins are injected.

It contains follicle stimulating hormone. Examples are: Menopur, Gonal F and Bemfola. These injections are given every day at a dosage of 75 IU. A scan will display any reaction to any medications issued. We recommend intercourse after the follicles have reached an acceptable size. A hormone shot can be given at that point. Monitoring of reaction can not be reliable, and often the cycle may need to be stopped and restarted if care is inadequate or too powerful. Treatment is typically provided for six months, which can be carried out consecutively without a break.

Potential side effects have various side effects. Pregnancy may be a risk of ovulation treatments. In up to ten percent of cases, treatment with Clomiphene or gonadotrophins may lead to twins. Twin pregnancies occur in about 1% of cases. Multiple pregnancies can be minimized, but they are not removed.

HCG or ‘Novarel’ is usually used to stimulate ovulation when there are a sufficient number of mature follicles per treatment regime. Since IUI and egg retrieval can be timed accordingly, it can be used in place of waiting for a sudden LH surge. LH and HCG bind to the same receptor. HCG has a longer half life than LH.

Five Ways To Naturally Induce Ovulation And Regulate Your Cycle

Ovulation is a symbol of fitness. Ovulation happens at around the same time per month, meaning hormonal levels are at a safe level. Anovulation means you’re not ovulating–you may still bleed each month. Here is what you need to know about delayed ovulation or anovulation, and ways to remedy it naturally.

If you have periods that are shorter than normal, consider discussing the following factors that could be causing this: Other factors that may lead to ovulatory dysfunction include:

Start bringing back whole grains, tasty fruits and vegetables like sweet potatoes and peas into your diet, taking it slow. Ability to cope with stress can improve! Steak? Please For the best quality fatty acids. Eat the avocados, oily fish, and nuts and seeds, but don’t skip the occasional red meat. Balance is important. Changes include keeping the room dark and quiet at night, having a good night’s sleep, and changing the room temperature.

Even, preventing or reducing caffeine consumption or smoking six hours before bed. Add a bedtime routine with a reading cycle, prayer, and no multimedia exposure (e.g., no phones, tablets, or computers). sleep page here and here There are many ways to help naturally regulate hormones and boost ovulation efficiency. Cycling your diet means eating certain types of seeds at certain phases of your cycle.

If you have one of those choices, please talk with your doctor. Examples of safe, daily cycle help include appropriate sleep, adequate protein and exercise, as well as weight loss. If you have already changed the formula to the right and you are still having problems, you can contact a physician who can understand your hormonal issues and help you find the cause of your troubles. Birth control can reduce symptoms and mask dysfunctions, but will not remove them.

Ovulation induction has been performed since the 1960’s. Provided in oral tablet form at doses 50-200 mg per day for 5 days per period, it is the most widely prescribed ovulation medication. CC is a synthetic hormone that is an anti-estrogen and inhibits the development of LH and FSH which are natural hormones that are formed by the pituitary gland (ovulate). A large number of women with PCOS can ovulate on CC.

Around 40% of women who ovulate on CD will get pregnant. CC is suggested in women who do not ovulate. These women usually have polycystic ovary syndrome (PCOS). Patients with low levels of LH or low thyroid would have little to no chance of success. CC can be used in ovulating women to increase the number of mature eggs. CC therapy should be closely monitored, ideally with an ultrasound scan or an examination in the first days of the menstrual cycle before beginning the drug.

Ovulation is better tracked by basal body temperature charting or ovulation predictor studies. Ultrasound during a late-cycle can be beneficial. Pregnancy, any form of ovarian cyst, or estrogen-dependent cancer are absolute contraindications to CC usage. Common side effects include hot flashes, mood swings, headaches, or nausea. Common side effects include cervical mucus and thinning of the uterine lining.

CC raise the probability of multiple births (primarily twins) to 7-10%. (compared to 1 percent without CC). Using the drug for 3 cycles might be too long. It may be easier to do a one month break. The drug does not allow its user to conceive after 6 cycles.

(Image: © Yvonne Leduc, U of S) A protein contained in semen can cause female mammals to ovulate. The protein has been identified in many animals, including humans, but researchers are not yet sure how it affects fertility. The material may be involved in the process that makes pregnancies viable. That may be valid for humans. “The whole idea of having a chemical substance in the seminal plasma in the male affecting the female’s brain and causing her to ovulate is really new for us,” Adams said.

It was thought that the stimulation of the vagina triggered the symptoms. In 2005, Adams and his colleagues discovered an ovulation-inducing component in llama and camel seminal fluid. This protein caused ovulation in females that were exposed to it. Adams collaborated with University of Saskatchewan grad student Marcelo Ratto and University of Chile researchers to discover the existence of this protein.

\They separated the steroid from the semen of induced ovulators (llamas) and spontaneous ovulators (cattle). This same protein has been detected in all mammals and may be involved in aging. A series of biochemical tests found the culprit to be a common substance: It is similar to a chemical called nerve growth factor. Nerve growth factor is a factor in preserving the body’s nerve cells.

It has been shown to function locally on nerves. It was also discovered that nerve growth factor has a reproductive role. When inserted into the vagina and uterus, it goes to the pituitary gland in the brain, producing a hormonal reaction that contributes to ovulation. “This is a new method of action for nerve growth factor ,” Some of the ovulation-inducing factor’s role in triggering egg release in induced ovulators is obvious, but it’s less clear what the protein is doing in spontaneous ovulators such as humans.

In cattle, it appears that it doesn’t affect ovulation. Instead, it alters follicle development in the ovaries, the structures from which eggs are published. Furthermore, Adams said, the protein influences the development of the corpus luteum.

The corpus luteum is a structure about an inch to 2 inches in size (2 to 5 centimeters). It is the result of the follicle after an egg is released and releases the hormone progesterone, which is essential for sustaining pregnancy. The findings indicate that the composition of a male’s semen can affect the woman’s chance of pregnancy. Adams and his team are now researching whether the quantity of ovulation-inducing factor in a male’s semen affects his fertility.